Best Battery for Solar in Camper Van Conversion and RV

Best Battery for Solar in Camper Van Conversion and RV

The battery is the most vital part of our DIY camper van conversion’s solar electrical system. All charging (through solar panels, the alternator, or shore power) goes into the battery, and all power draws come from it.

Nothing runs on “solar.” Your battery choice dictates all the other components of your system, because EVERYTHING runs off batteries. Solar panels, B2B charger, and shore power are means to charge said batteries.

We think this post will give you the info you need to buy the right battery setup for your needs. 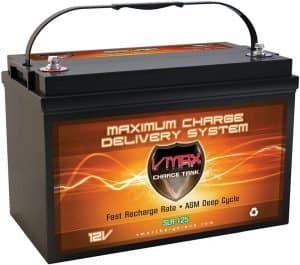 VMAX batteries are the best of the AGM category as detailed in the comparison section below. We have 2 of the 155AH batteries by VMAX installed in our van and they are performing great. The bundles of 2 batteries are often cheaper on eBay so we recommend checking those links too. This AGM battery is half the price of an equivalent Lithium battery, but has a shorter lifespan. Keep reading for analysis of the lifespan differences for different uses. 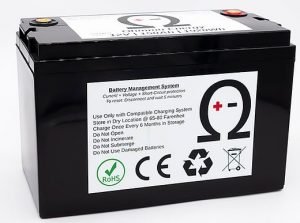 Ohmmu’s battery offers more capacity (150 Ah vs. 100 Ah) at the same price as most other competitors. The Ohmmu battery can charge below freezing, handle peak discharge of 200 amps (almost any appliance), and has a 4-year warranty. Only Renogy’s 100AH battery is a bit cheaper, but Ohmmu’s battery has almost double Renogy’s lifespan. But keep reading to find out whether it’s worth paying extra for Lithium over the more affordable AGM option..

Batteries are classified based on the chemistry stored which is then converted to electrical energy. There are three major types of battery chemistry:

Lifespan of AGM vs Lithium

We’ll start out with a couple definitions:

Battery Cycle: Every time you draw the battery to a given Depth of Discharge then recharge to full, that is one cycle. A 100 Ah battery discharged to 80 Ah and then charged back up to 100 Ah has undergone one cycle.

To calculate lifespan, manufacturers provide us Cycle Life vs. Depth of Discharge charts: 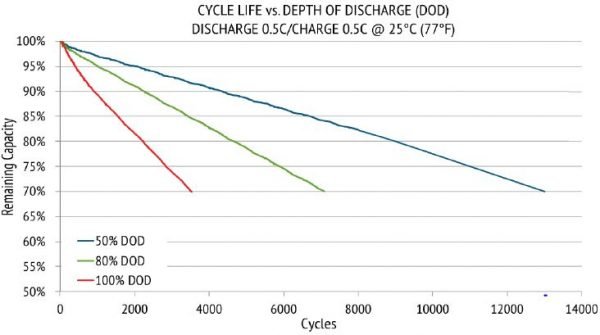 RELiON’s lithium battery has 5,500 cycles when discharged to 90% DOD at each cycle. After these cycles the battery will be at 70% of original capacity. (Source, spec sheet)

VMAX’s AGM battery (orange lines) has 900 cycles when discharged to 50% DOD at each cycle. After these cycles the battery will be at 60% of original capacity. (source, PDF)

Note: Lithium batteries are marketed as being able to be drawn in their full capacity, but a true 0% state of charge would most likely kill the battery. We would always want a bit of a capacity buffer for day-to-day use anyways. As such, we use the 90% DOD figures in our analysis, and would buy a lithium battery based on 90% usable capacity. 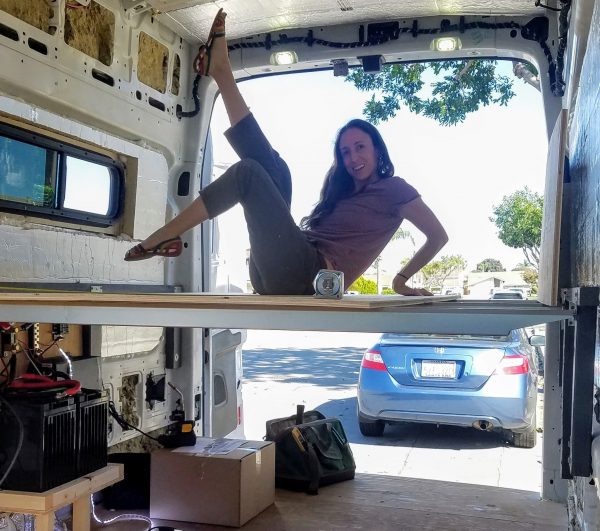 Taking a break after building our bedframe. Our batteries and electrical components are under the bed.

Here’s the deciding questions: How many days will 5,500 cycles or 900 cycles last us, and do we want a product to last us longer?

In our real van life, we don’t fully cycle the battery every day! There are days where we spend very little time in the van using electricity (we’d rather be out climbing). And long, sunny day means we have incoming solar power replenishing our consumption in real-time. A lot of driving means more than enough charging from the alternator. Honestly it’s not uncommon for us to only draw our batteries to 15% DOD.

An AGM battery with a 900 cycle life will last us about 4 years, accounting for low usage days and remaining battery life.

A lithium battery with a 5,500 cycle life will last us about 24 years, accounting for low usage days and remaining battery life. Manufacturers don’t detail calendar lifespan, but we’d be surprised if it last 24 years without some degradation.

A battery is generally considered to have reached its end of life when it cannot hold more than 60% or 70% of its initial capacity. That is, a 100Ah battery becomes a 60 Ah or 70Ah battery. That might be a bit conservative for us though, since a 70% capacity battery certainly isn’t a dead brick, especially if we bought the battery only expecting to draw 50% of its capacity. We’d still be able to use the battery for some time after that “end of life” point.

Note on charging: AGM batteries really need to be charged back up to 100% constantly so maintain their lifespan. This isn’t required for lithium. Unfortunately, AGM charges significantly slower than lithium in the absorption stage, the last 15% of charge. This means it will be more difficult for AGM batteries to get the full charge they need.

Cost of AGM vs Lithium

Here’s the good news: solar battery prices continue to fall across the board. Prices for premium lithium batteries have decreased since we bought AGM batteries in 2018. But then again, AGM prices have fallen too!

Our recommended batteries were selected because they have high quality specifications for their type, with the lowest pricing. Our recommended lithium battery will cost you about double the equivalent capacity recommended AGM battery. As we calculated, the lifespan of lithium is about six times longer than AGM.

Waste and Recycling of AGM vs Lithium

On a side note, you’ll need a battery monitor display to reliably track your battery’s activity. Doing this will drastically extend the life of this expensive equipment. We’ve got the run down of What to Look for in a Battery Monitor.

It’s for sure, lithium batteries are much smaller and lighter than AGM. Your van or RV will appreciate it.

That’s a 82 pound weight difference on batteries of equivalent usable capacity. (Reminder, we are comparing a 200Ah AGM to 100Ah Lithium battery because we can only use 50% of an AGM battery’s capacity).

How much value should we place on that 82 pound difference?  Let’s put some numbers to it: a study computed a 5% weight reduction in a large truck improves gas mileage by 1.7%. Well, 82 pounds represents about 1% of our van’s total weight, so we might get a 0.3% improvement in gas mileage, or a difference of less than 0.05 miles per gallon.

We bought AGM batteries and just imagine an 82 pound small, hungry friend is riding along with us. 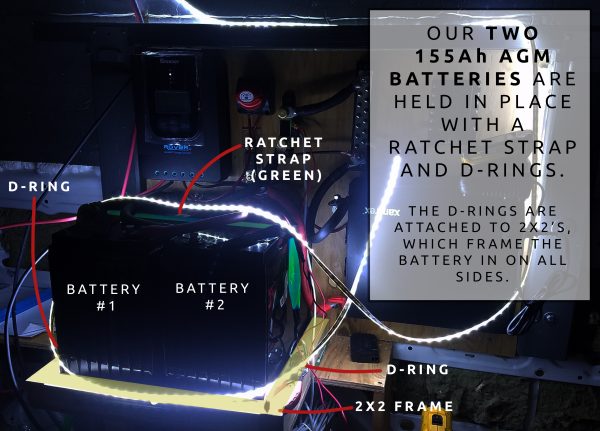 Lithium batteries are known to charge faster than AGM batteries. In particular the absorption stage, the last 15% of charge, goes slower with AGM batteries. Due to how many moving pieces there are in the charging process, it’s hard to nail down the exact different in their rate of charge. RELiON, a lithium battery manufacturer, claims they charge about 4 times faster.

Peak discharge current represents the max current the battery can supply for a short time (depending on the battery, this amperage can be supplied for 5 to 30 seconds). The peak for the VMAX AGM battery is 1,000A, while almost all Lithium batteries is 200A (besides Renogy’s which is 100A).

The only appliance you’ll use in a van that might draw more than 200A, or approximately 2,400 watts (remember, Amps x Volts = Watts), is a rooftop air conditioner.

Maintenance on both lithium and AGM batteries is minimal. AGM just needs regular use, discharging to least 85% and re-charging to prevent loss of capacity.

The below chart, from VMAX’s specification sheet, shows the permanent capacity loss of an AGM battery if it gets no usage. 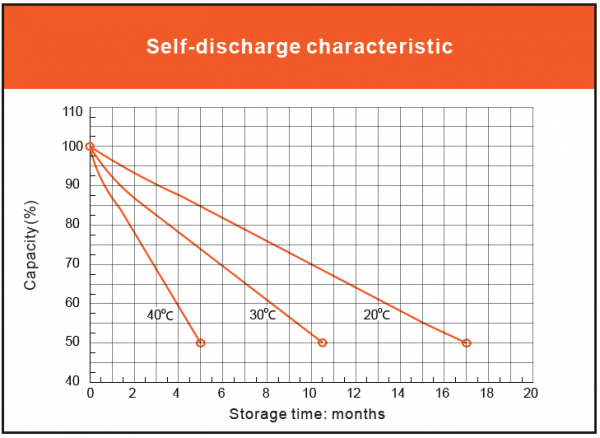 Let’s summarize our lifespan vs. cost comparison for Lithium vs. AGM batteries. These estimates account for some low battery usage days, and the usable remaining life on the batteries after the cycle lifespan.

A lithium battery with a 5,500 cycle life will last us about 24 years of full-time van life, or 60 years of part-time van life. Manufacturers don’t detail calendar lifespan, but we’d be surprised if it last 24+ years without some degradation.

For a weekend rig and part-time van life the choice is easy: an AGM Battery by VMAX with a lifespan for you of about 10 years is the choice! It’s not worth paying for longer life with a lithium battery.

For full-time van life: an AGM Battery by VMAX with a lifespan of 4 years is our choice! It would take 8 years of full-time use for the premium of lithium to pay for itself, and we just don’t know that we’d be using it for that long (as much as we love vanlife). AGM’s 100% recyclability means we are comfortable trading for a new battery in a few years. And by the time we need to replace, improved battery technology may mean we are getting a big upgrade!

How to Select the Right Capacity for Deep Cycle Batteries

Selecting the Amp-hour capacity for your battery bank is not an exact science. You can calculate your Amp-hours for every single load used on a daily basis (fridge, lights, water pump, etc).

We use 60 Ah average on a daily basis. We want more than 1-day worth of capacity in case of cloudy days (no solar) and minimal driving (no alternator charging), so we will use a rule of thumb that we want 1.75-days worth of capacity. Therefore, we need 105 Ah of usable capacity. Remember, we only draw 50% of an AGM battery of 90% of a Lithium battery, so need 210 Ah of AGM battery capacity or 125 Ah of lithium battery capacity.

Our recommended battery sizes for how much of an “electricity hog” you will be: 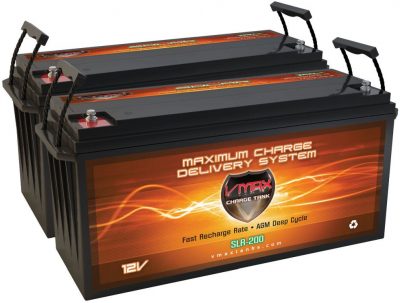 How to Wire Solar Batteries in Your Van or RV

Here’s the takeaway: in almost all cases if you have more than one battery in your van, you will want to wire them in parallel.

(The exception: if you are going to draw huge amounts of power, you will want to wire batteries in series in order to moderate the amperage. A good rule of thumb is to never draw more than 200A. A 3000W inverter would draw 250A at 12V, so consider wiring in series. Lower amperage is safer, more efficient, and can use thinner cables).

There are two ways to wire batteries: in parallel and in series. Let’s assume we have two 100 Ah batteries rated at 12 Volts. Almost all batteries you will see marketed for van conversions are 12V batteries.

Wiring in parallel doubles the amperage while keeping the voltage the same. Our two 100Ah/12V batteries will function as one 200Ah/12V battery.

Wiring in series keeps the amperage the same while doubling the voltage. Our two 100Ah/12V batteries will function as one 100Ah/24V battery. 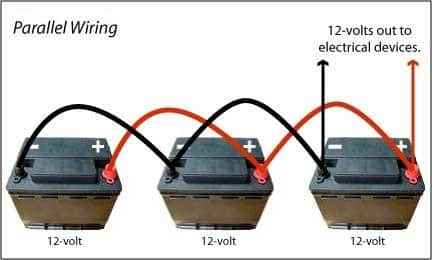 Also note that only identical batteries should be wired to each other. Don’t try to connect two different brands or even ages of batteries. Batteries are sensitive beings and don’t play well with other kinds. 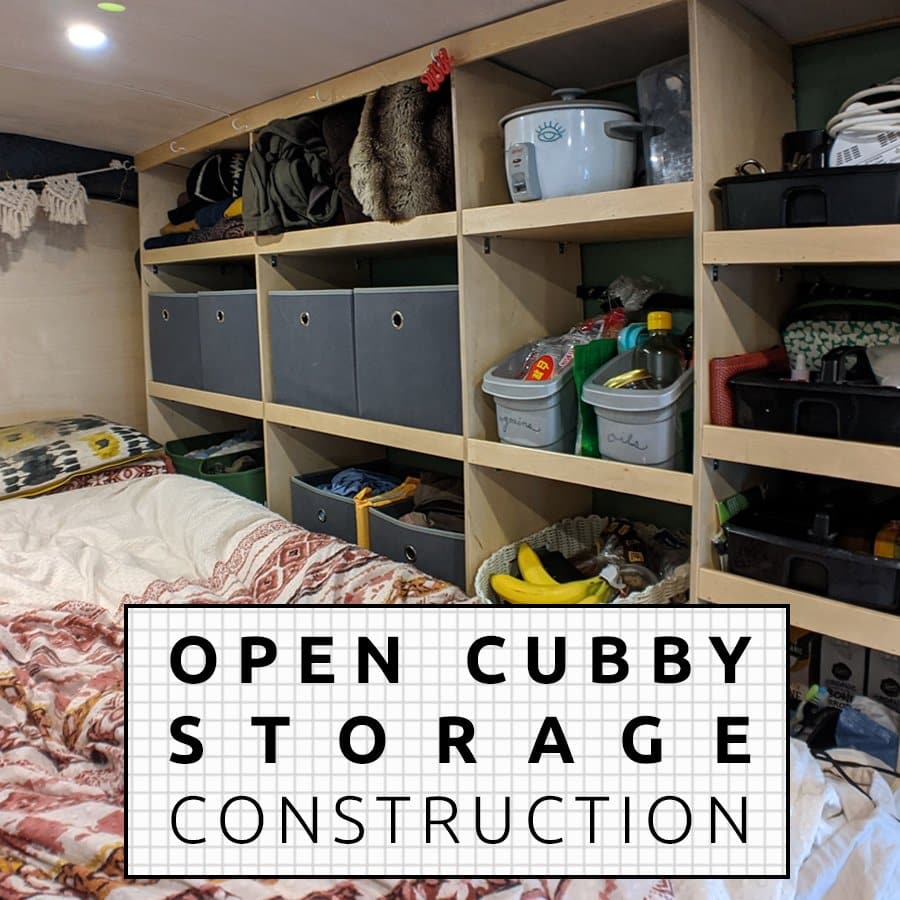 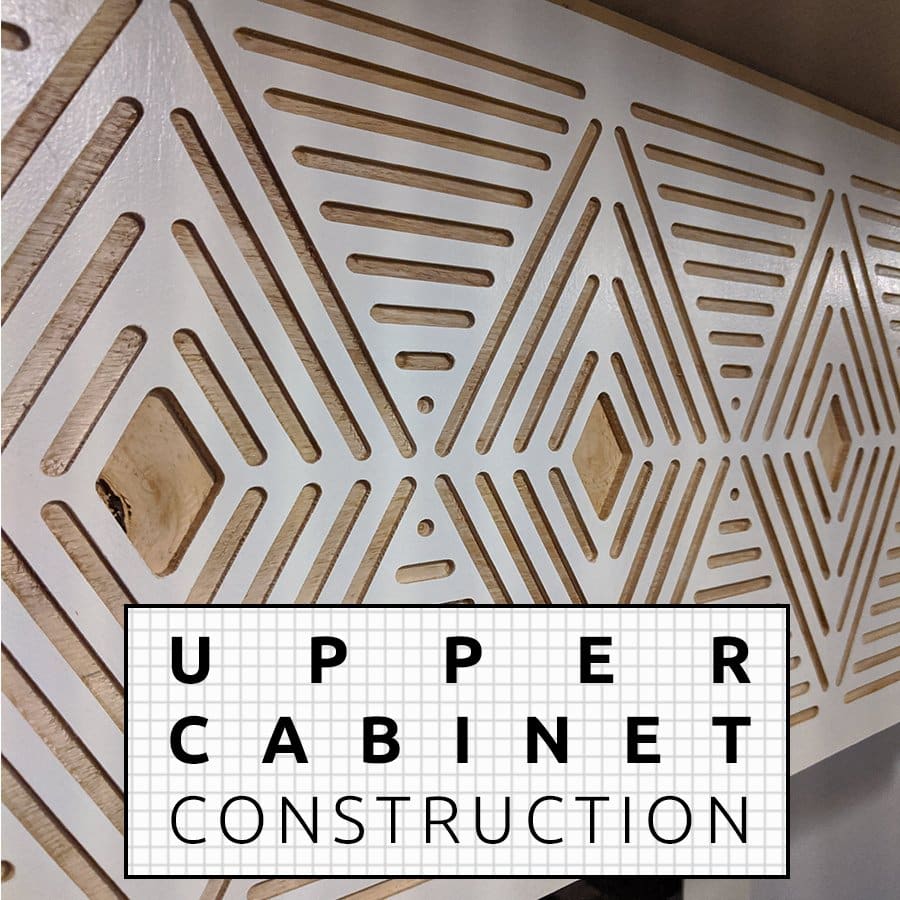 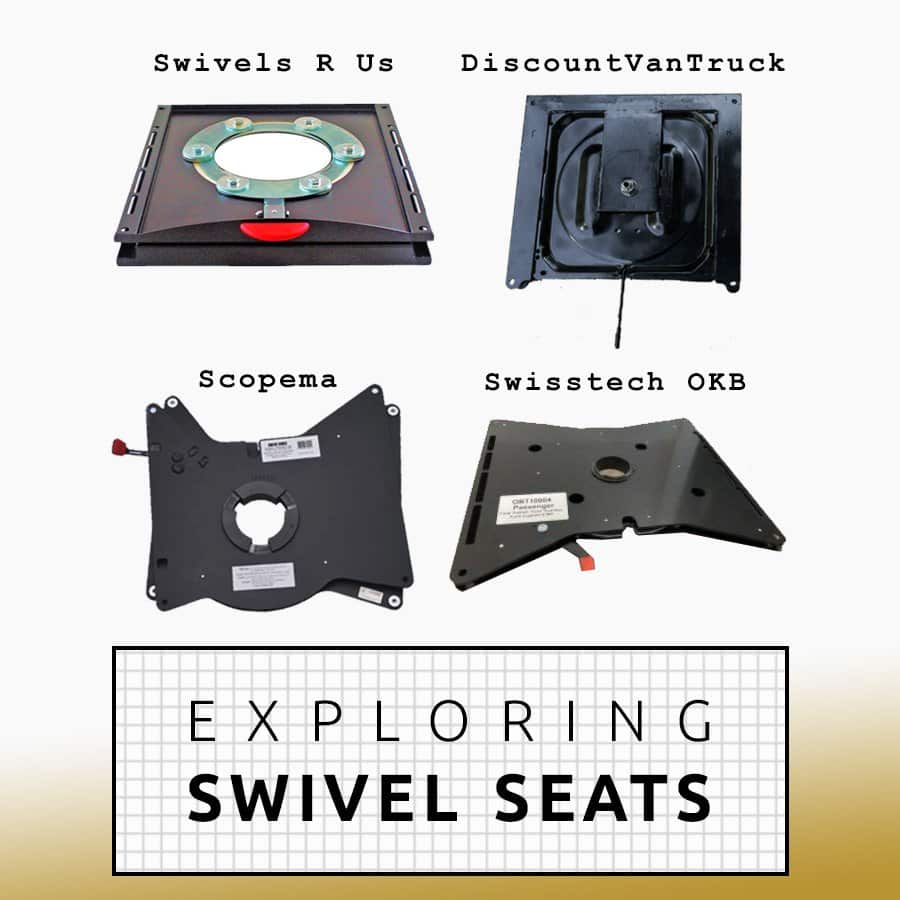 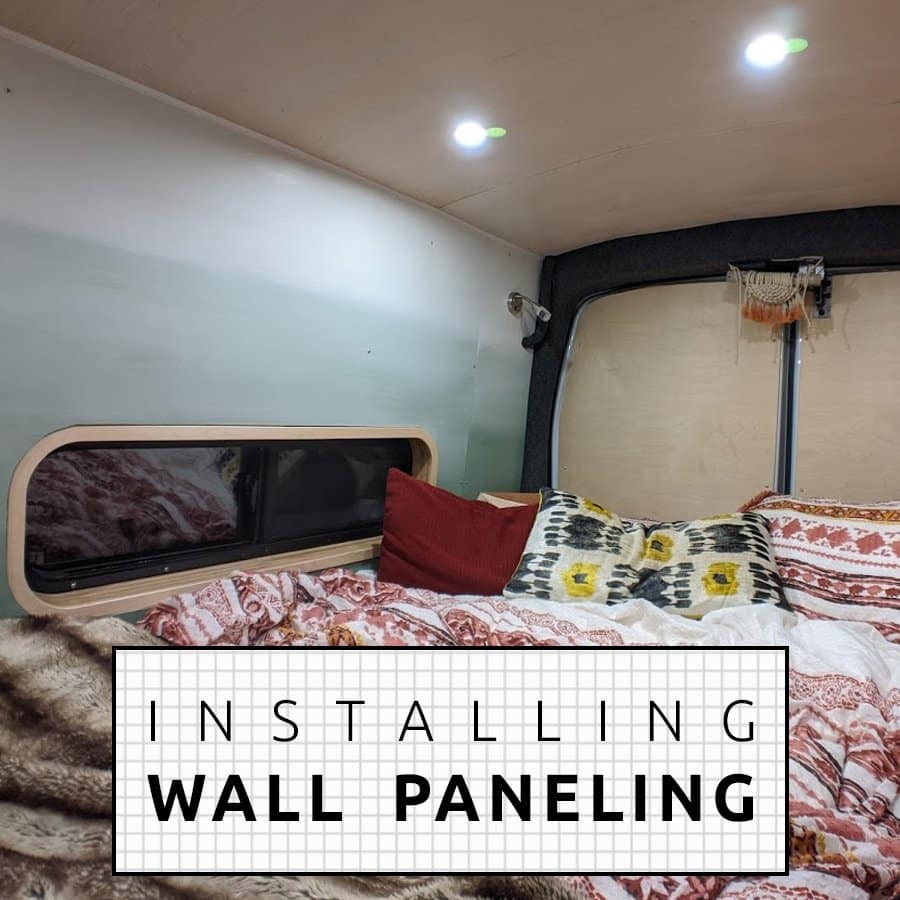 How to Choose Each Device for your Electrical System: