The battery monitor in a camper van conversion or RV’s solar electrical system can help you operate the system sensibly. Plus, we get a kick out of seeing how many watts of solar power are coming in, or how much current our coffee maker is drawing!

You don’t NEED a battery monitor. Not in the way that you need solar panels and cabling. A battery monitor, especially a good one, makes using your battery power easier to understand and track. It’s also very likely to extend the life of your batteries.

We will also give you our favorite battery monitors for different budgets.

We give you background and how-to info so you can make an informed buying decision. Our guides are based on technical research and practical experience building our van on a budget, and now living in our van full-time. We hope this helps! 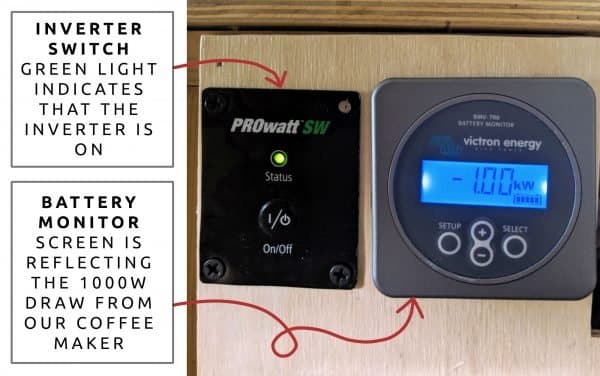 Our Recommendation for basically every electrical system: 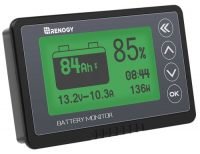 Best balance of quality and price

No bluetooth, but do you really need that anyways?

It is easy to read and use, along with being easy to mount. It’s got a helpful manual and instructional video (see our guide at the end of this post). Good construction and 10 ft data cable allows easy placement for most layouts.

While not strictly necessary, we unequivocally recommend buying a battery monitor for the health of your electrical system. Renogy’s is our favorite for balance of cost and function. It’s also available on Amazon.

Cheap Battery Monitor that will work and is better than nothing: 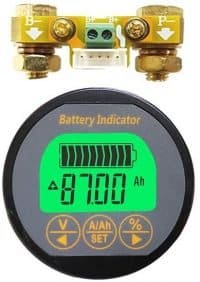 Has the important functions: Battery life percent and amp current

The AiLi battery monitor is the kind of knock-off we are all familiar with: basically functional, but suspiciously cheap. It gives us the basics: the battery’s state of charge (it’s remaining power), and how many amps are going in or out of the batteries.

It’s pretty lacking on all other fronts though. Here’s some of its issues:

If nothing breaks and you can deal with these issues, you’ll be pretty stoked to pay so little. But if the shunt ever fails, you’ll have to rewire things because you can draw from your batteries. If you’re going to be running any devices that potentially draw more than 1,000 watts, go for AiLi’s 350A version. Alas, when we designed our solar system this product wasn’t on the market. We’ve got the higher end Victron BMV700.

Favorite High-End Battery Monitor (we’ve got this one): 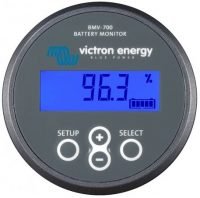 High quality and reliable. We’ve loved it for 2 years.

Easy to use documentation

We’ve got the BMV700 in our van. Victron’s battery monitors are the standard in the van, RV, and boat industries. They are reliable and easy to use. Installation was easy with great documentation. It’s everything you are looking for in a battery monitor, you can just gotta pay a bit more for it.

There are two common models: the BMV700 and BMV712. The main difference is the BMV712 has a bluetooth and can display all the battery stats on a phone app. We couldn’t justify paying an extra $50 for an app. Vans are tiny homes, and we are never more than 8 feet from the battery monitor. We don’t need to check it on our phones. 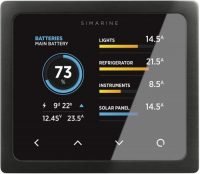 This is the battery monitor from the future. It has the ability to tell levels of individual liquid tanks! You can add a sensor to a fresh water tank, propane tank, grey water tank, etc., and then glance at monitor to see your water/propane levels. Sensors are also available to display temperature and humidity. You could put a sensor inside or outside the vehicle, in the fridge, in the sleeping area, etc. This can all be displayed on the screen and of course on an app.

It also performs all the typical battery monitor duties. Of course, all this comes at a price of money and complexity of installation. If looking for an ultra-nerdy toy for your van, this seems like a fun one (if you can get it set-up right).

What Does a Battery Monitor Do?

Most battery monitors display (among other things):

There’s a display screen to put in the van’s living area for quick glances at battery status. This data is provided to the screen by a shunt near your electrical components. The shunt placed between two pieces of the electrical system. 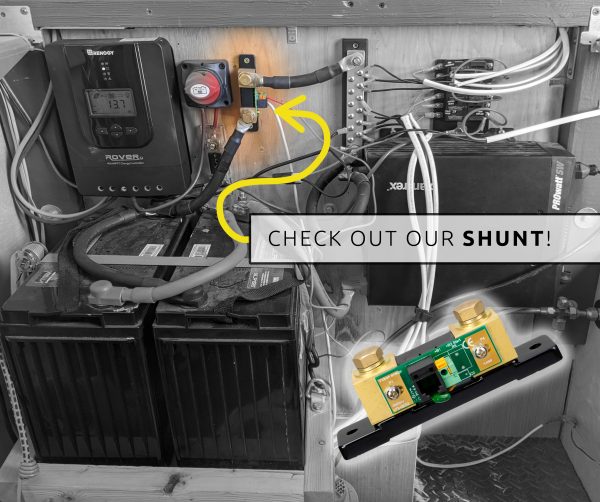 What the Shit is a Shunt?

A shunt is a small piece of equipment to place near your battery. The shunt measures battery voltage and its change over time.

A shunt a resistor of very low but accurately known resistance. The voltage drop through the shunt is measurable but low enough not to disrupt the circuit. The measured voltage drop can be scaled to display the amount of current (amps).

All current in or out of the battery goes through the shunt and gets measured. The shunt is typically wired to the positive and negative terminals on the battery. The shunt’s small data wire provides that data to the monitor display screen.

The battery monitor shows us the “net” Amp current at any time. i.e., if solar panels are generating +10A of current, and you are consuming (-6A) of current, the monitor displays positive 4A of current.

The thing is, battery monitoring is not an exact science. In short, their figures are inaccurate due to variability in how batteries function. But, battery monitors are pretty close and are (way) better than nothing.

A battery monitor is often compared to the gas gauge in your car, but that is not a good analogy. The battery monitor works by using voltage and current entering and leaving the battery. Some problems though:

A battery monitor’s state of charge computation is like a gas gauge – but imagine the level of gas in the tank (battery voltage) is always fluctuating. Battery voltage can go up or down just because it got colder or hotter. Battery voltage is a moving target.

Battery monitors also display usage statistics (Amp-hours consumed). This is like your car trying to tell you miles-per-gallon without knowing how fast you were driving.

We recommend reading this in-depth article on improving a battery monitor’s accuracy: https://marinehowto.com/programming-a-battery-monitor/

Do You Need a Battery Monitor?

You need to protect your battery. If the battery gets drawn too low, it can severely reduce its lifespan. And batteries are expensive!

If there’s anything you take from this post – you need to have a method to reliably check your battery’s remaining capacity (state of charge). Obviously, you want to know how close the battery is to being dead.

(From documentation for the VMAX AGM batteries).

A battery’s remaining capacity (state of charge) is theoretically shown by its voltage. But it’s not that simple. Remember, battery voltage levels are a moving target.

The manufacturer provides us a battery’s voltage based on its state of charge.. but only after the battery has rested for 3 hours.

That means we can’t use electricity and then glance at the battery voltage and expect an accurate state of charge.

An example of weird battery fluctuation:

Take a brand new battery, and apply 40 amp load. Before you apply the load you measure 12.6 volts on the battery post. Apply the load and the battery voltage sags to 11 volts. Well according to the chart your battery is completely discharged, when in reality nothing is wrong. It means your battery has an internal resistance .04 Ohm’s which is about normal for a 12 volt 100 AH battery. Take the same battery. except this time it is 50% DOD with an open circuit voltage of 12.1 volts. Apply a 40 amp charge current and the battery voltage will read 13.7 volts. That would tell a meter your battery is above fully charged of 13.7 volts when in fact your battery is 50% DOD. That same .04 Ohm’s Internal Resistance is the cause.

Battery monitors adjust for these fluctuations and give us estimated capacity and usage stats.

Other Benefits of Battery Monitors

Besides conversing the life your expensive batteries, the battery monitor makes you day-to-day life easier. We’re happy to have a battery monitor because we can see how many watts of solar our panels are generating. We see how fast it comes in, how much the clouds affect the power, etc.

Without the battery monitor we’d lack reliable data on the effectiveness of our solar panels.

Another perk is the ability to see how much energy each load (electrical device) is drawing. For example, how many watts does the coffee maker or refrigerator use. If we were to run low on battery life we could nail down the culprit.

Things to Look for in a Battery Monitor

Victron and Renogy’s monitors are 500A, and AiLi sells 100A and 350A versions. That represents the number of amps of current that can run through the shunt.

If you have an inverter, there’s a good chance you’ll draw over 100A. Even a 1,000W inverter can draw about 2,000W of surge power, which would fry the shunt. If you need help learning about inverter inefficiency and selection, read our Guide to Power Inverters.


Victron’s BMV712 has a bluetooth module to display data on their phone app. It displays the same data that is present on the monitor’s screen, and it stores statistic history.

Pairing Victron’s bluetooth enabled battery monitor and charge controller gives you some pretty awesome real-time and historical data. Need help choosing your charge controller? We got you covered: What to Look For in a Charge Controller.

The BMV700 is about $50 cheaper and has all the same capabilities but without a phone app. We have a Renogy Rover 40A charge controller and couldn’t justify that extra cost for the app, so we installed the BVM700.

The AiLi battery monitor has plastic casing on the shunt terminal. That’s a bad design because a lot of torque is necessary to tighten the connections.

How to Wire a Battery Monitor

Here’s the good news: connecting the battery monitor is one of the easiest wiring jobs in a solar system. We’ve got an image from Victron and then some helpful videos. 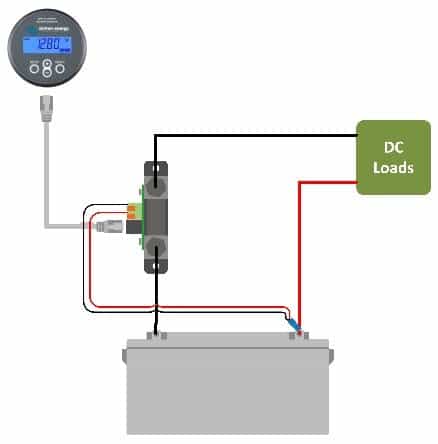 We’ve got a couple tips:

Besides those tips, we will let the manufacturers and experts show you how to wire each of our recommended battery monitors.

AiLi doesn’t have a video, which is no surprise.

We’d love to link the website for the cheap AiLi battery monitor. We aren’t exactly surprised, but AiLi doesn’t have a website.

How to Choose Each Device for your Electrical System: