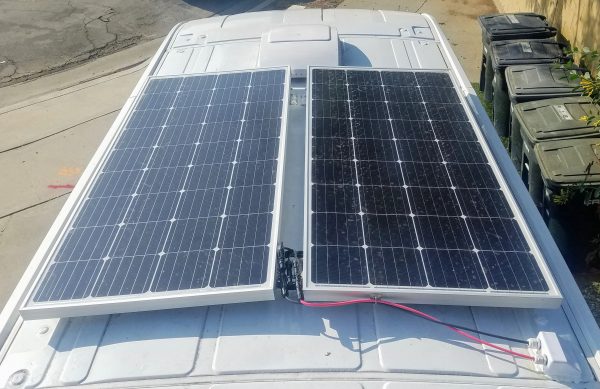 We mounted two 200 watt solar panels to our camper van roof. They are attached with Renogy Curved Z Brackets, which are made for a curved roof such as a van.

Why did we mount with Z Brackets? There are some installation options that just won’t work because of the curved roof, such as tilt mount brackets. There are a few other common options for mounting panels which we decided weren’t for us:

Our Favorite Solar Panel for a Van

If we could do our van conversion over again, we would choose flexible solar panels. Rigid solar panels, being about 25-40% cheaper, are an easy choice for large fixed solar installations like a house rooftop. For a vehicle with unique installation difficulties and where every pound matters, the extra flexible panel cost is worth it. Flexible panels can be easily installed with VHB tape or adhesive to the roof.

→ How to Choose Solar Panels for a Camper Van ←

This article details our installation of rigid solar panels, and for those we heartily recommend the 200 watt panels by Hightec Solar. These are performing well for us after 2 years.

We recommend Renogy flexible panels because they are the best balance of cost and durability, with a 25 year warranty. Cheaper panels are made with a PTE coat that yellows and degrades much quicker than Renogy’s ETFE coating.

Where to Place Solar Panels on the Van Roof

To secure the brackets, we needed the bracket fasteners to be accessible from inside the van. Therefore panels were placed so that the brackets would not land on top of an interior ceiling rib. 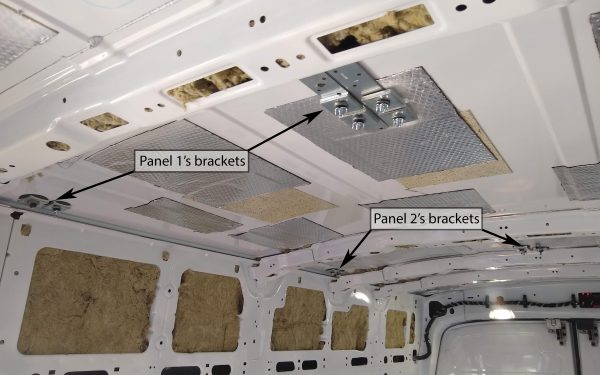 We placed our panels as forward on the van as possible to maximize the unused roof space for any potential future use (sun roof, second fan). After installation, the front of the panels are only a couple inches from the fan lid. In retrospect this is risky as we don’t want the fan lid to cast any shade on the panels. Fortunately, unless we were to park at a very certain angle while the sun is really low, there’s no shading.

We left a small 3 inch gap between panels so that they are as far from the side of the van as possible and therefore less visible from the ground.

The typical solar panel is mounted with a Z Bracket which is simple and flat, but we elected to go with a “Curved” Z Bracket which is specifically made for a curved roof (like a van!). The Curved Z brackets are two separate sliding pieces. The upper piece is bolted to the panels, while the lower piece adjusts to sit flush on the curved van roof.

If doing it over, we would NOT use Curved Z Brackets, and instead would just use a standard Z Brackets. The curvature of the Transit roof just isn’t steep enough to necessitate the extra component. The downsides of the Curved version are: 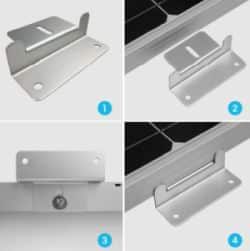 The cheaper website for the Renogy Z Brackets seems to alternate, so check the prices: 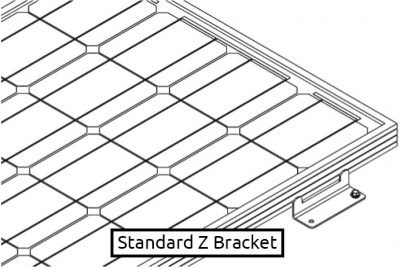 The Z Brackets from Renogy came with bolts, nuts, flat washers, and lock washers. The Z brackets also included screws to attach the brackets to the van, but those would need some sort of internal frame to screw into inside the frame (just screwing through van sheet metal is not strong enough). Screws are okay for attaching panels to a house roof, but not a moving vehicle! We used expansion nuts, see below…

What the Heck are Expansion Nuts?

We attached the brackets to the van with Brass Expansion nuts, also known as well nuts. We hadn’t encountered these before the van! Renogy specifies that, as opposed to just using screws for the brackets, “installation on the roofs of RV’s typically requires for more specialized instruction”

The well nuts were #10-32 x 1-1/16 in. “The expansion nut is comprised of two parts: a rubber outer sleeve with a flange that serves as a plug, and a brass insert. The plug is placed into the hole and a bolt is inserted. Upon tightening the bolt, the end of the rubber backs up toward the flange, expands, and anchors itself within the hole. They are good for applications where light sealing and vibration dampening are needed.”

A video is worth a million billion words. This one is a really helpful exhibit on the expansion nuts:

Inside the van, we need more support and anchoring surface for the nuts than just thin van metal. Per Renogy “A minimum roof thickness of 3/8″ is recommended,” which means we need to build up our van roof. Our components that the nut is compressing up to the van metal are, from top to bottom:

The other size expansion nut available is ⅝” (which is actually what Renogy specified in the bracket manual) is for material thickness 0.05” to 0.22”. Since we had more than just thin van metal, we needed a longer expansion nut.

After experimentation, we found 1-¼” screws were the shortest that could be used with a 1-1/16” expansion nut. Those were rarely in stock though, so we sized up and used 1-½ inch Machine Screws #10-32. #10-32 is the same threading as the expansion nuts, and stands for a #10 gauge screw, with 32 threads per inch. The screws and washers are stainless steel because they are outside the van and we don’t want them rusting. On top of the van, with the screws we used #10 stainless steel flat washers and #10 stainless steel split lock washers. Split lock washers are common in automotive use and prevent the loosening of a screw from vibration.

To determine where our bracket holes would be, we brought the panels up to the roof (with the brackets already attached), and laid out the panels and marked the holes in the brackets. We drilled 3/8” holes through the van metal roof for the expansion nuts. Fortunately, if the holes are not spot on, there is a little wiggle room with these nuts (but not much).

To ensure a water tight seal, we added a small amount of Dicor Lap Sealant caulk around the drilled holes. Then we placed the expansion nuts through the holes.

Side Note: A lot of people use silicone as a sealant on their vans and RVs. Silicone is not as flexible as Lap Sealant, and therefore is more prone to cracking from vehicle movement. The big problem is that it is really hard to remove (think hours of scraping and solvents). If it’s not completely removed, then no other sealant, including silicone, will ever stick to it.

One tube of Lap Sealant was all we needed for the fan installation and everything else (cable entry box, panel brackets), so do yourself a favor and buy the right product. If you insist of being stubborn and buying a silicone caulk, then buy Silicone II instead of Silicone I. It’s what’s called a “neutral cure” silicone which, per GE, enables Silicone II to adhere to a broader range of substrates such as metals.

We lined the brackets (attached to the panels) up to the 3/8″  pre-drilled holes. Nadia stood inside the van holding the aforementioned washers up through the expansion nut. Kevin was on top of the van and, after assembling the screw/washer/lock washer assembly, inserted a machine screw through the bracket (2 screws per bracket) and started to screw, “activating” the expansion nut. It’s worth noting that we ripped through an expansion nut when using an electric drill. To prevent this, use a low setting on the drill and finish tightening your expansion nuts with a screwdriver.

When everything was installed, we added #10-32 Tee Nuts (previously pictured) to the ends of the screws as a fail safe. If the expansion nuts somehow pulled up and through, the tee nuts prevent the screw from pulling through. A tee nut was simply the longest diameter (widest) nut we found. 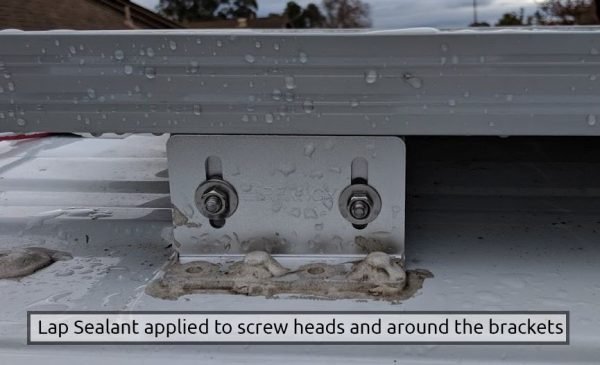 Water could potentially leak through the screw heads and between the brackets and rubber flange of expansion nuts, so we added more Dicor Lap Sealant to the screw heads and around the brackets. The lap sealant collected dirt for a few months before we took this picture. After this dried (definitely before covering this all with insulation), we sprayed the roof with a hose, and no leaks!

When we insulated our ceiling, we notched spaces for the expansion nut assembly out of the rigid polyiso insulation. Nadia (nicer handwriting than Kevin) then indicated on the faces of the insulation where these were located, so we know their placement if we need access the assembly in the future. 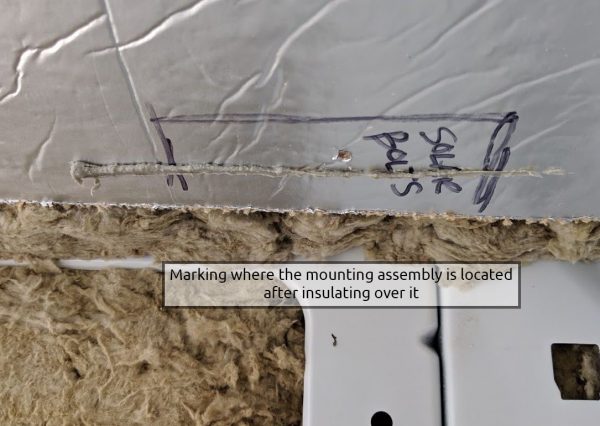 Running Wires from Panels to Inside Van

We ran the wires through the gland box (one person on top, one person inside pulling down the wires). The nuts on the gland box were then turned to fix the wiring. We then glued the gland box to the roof with a suitably strong (compatible with metal) weather resistant adhesive Sikaflex-221. The roof is slightly curved so we added extra adhesive where the flat bottom of the gland box did not sit flush with the roof.

After the adhesive set, for waterproofing we added Dicor Lap Sealant around the gland box. 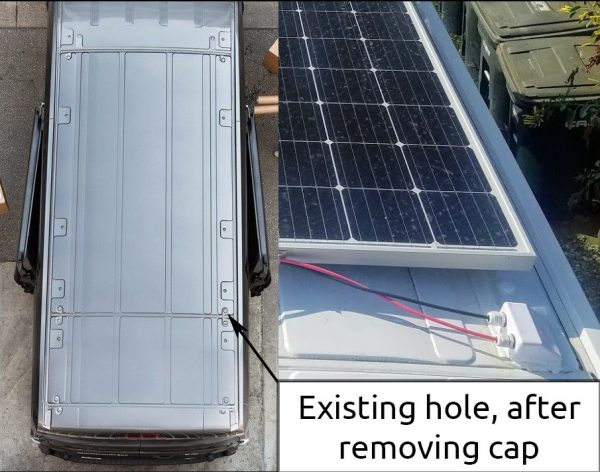 Rather than drilling yet another hole in the roof, we ran the wires through one of Ford’s holes on the roof using a Double Cable Entry Gland Box. These boxes are water tight via a rubber seal that is compressed around the wires once they are in place.

To protect the wires we added a Rubber Grommet in the van hole. We bought a bunch of grommets and test fit, and the linked size is correct for the roof holes. Two 8 gauge wires fit snugly through this grommet. We also added a small amount of PVC conduit inside the van through which the wires run down to the charge controller.

The wiring in the grommet and the conduit will fit behind our ceiling and wall, respectively. 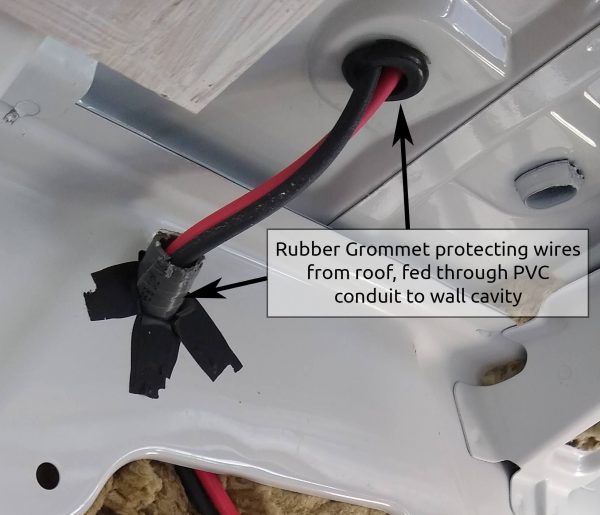 Are the Solar Panels “Stealthy”?

After installation, the most glaring aspect of the installation visible from the ground were the red & black positive and negative wires running from the panels. To blend in with the white van, we painted the wires with a white outdoor paint.

With the wiring not visible, we are happy with the look of the installation. 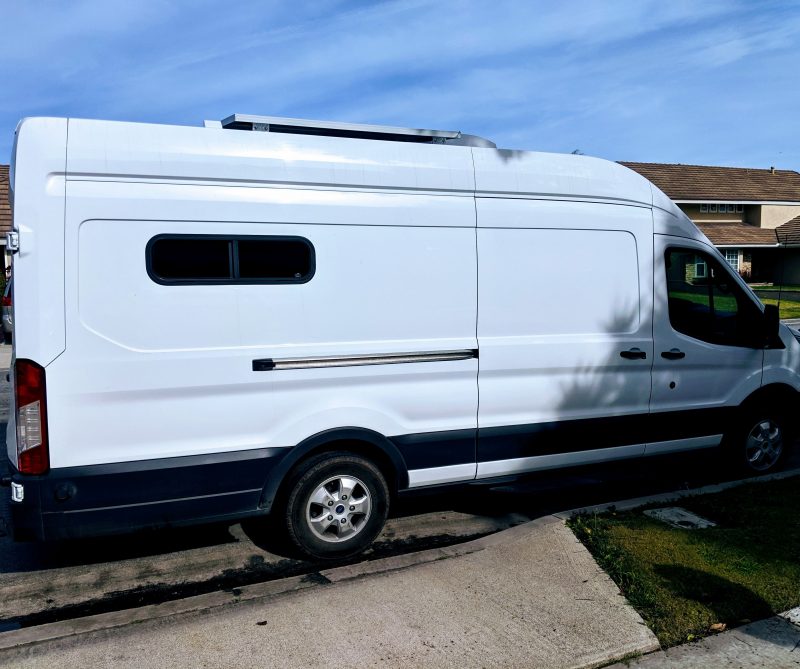